The Laws of Cricket, 2000 Code – The Preamble, The Spirit of Cricket

“Cricket is a game that owes much of its unique appeal to the fact that it should be played not only within its Laws but also within the Spirit of the Game. Any action which is seen to abuse this Spirit causes injury to the game itself”.

The major responsibility for ensuring the spirit of fair play rests with the captains.

There are two Laws which place the responsibility for the team’s conduct firmly on the captain. 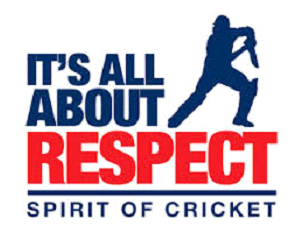 The captains are responsible at all times for ensuring that play is conducted within the Spirit of the Game as well as within the Laws.

In the event of a player failing to comply with instructions by an umpire, or criticising by word or action the decisions of an umpire, or showing dissent, or generally behaving in a manner which might bring the game into disrepute, the umpire concerned shall in the first place report the matter to the other umpire and to the player’s captain, and instruct the latter to take action.

According to the Laws the umpires are the sole judges of fair and unfair play. The umpires may intervene at any time and it is the responsibility of the captain to take action where required.

The umpires are authorised to intervene in cases of:
• Time wasting
• Damaging the pitch
• Dangerous or unfair bowling
• Tampering with the ball
• Any other action that they consider to be unfair

The Spirit of the Game involves RESPECT for:
• Your opponents
• Your own captain and team
• The role of the umpires
• The game’s traditional values

It is against the Spirit of the Game:
• To dispute an umpire’s decision by word, action or gesture
• To direct abusive language towards an opponent or umpire
• To indulge in cheating or any sharp practice, for instance:
o to appeal knowing that the batter is not out
o to advance towards an umpire in an aggressive manner when appealing
o to seek to distract an opponent either verbally or by harassment with persistent clapping or unnecessary noise under the guise of enthusiasm and motivation of one’s own side

There is no place for any act of violence on the field of play.

Captains and umpires together set the tone for the conduct of a cricket match. Every player is expected to make an important contribution to this.
The players, umpires and scorers in a game of cricket may be of either gender and the Laws apply equally to both. The use, throughout the text, of pronouns indicating the male gender is purely for brevity.
Except where specifically stated otherwise, every provision of the Laws is to be read as applying to women and girls equally as to men and boys.